I was looking for a place to hang from near my hometown. Wanted to spend a night in the woods, but also to be home early in the next morning.

Found this lean-to from north side of Tampere, only 25 min drive from home. It was also quite new place, build by Vesipirkkojen Ry (association). Name Personkolo was a bit funny, because i read it wrong first time (Perskolo, which means butthole).  Kaarina Trail was passing the place, so thought i could visit there in the summer when i walk the trail. But things didn’t go well for one reason and what it was, you’ll find out soon.

My friend pick me up at 10.30am and drove to the road where we can get to the lean-to. I was a bit worried, that the gate which the map showed, could be closed. But it wasn’t. Also i didn’t know if there is a space to park the car, but no problem with that either.

Lean-to was only 150meters from the small road where we parked. Walked to check it out, everything looked ok so picked up the gear from the car. It was snowing and place was beautiful.

We found the good place for our hammocks and hang them first. I was a bit faster so started to chop the firewoods and got it lid up just when my friend was ready. So we enjoyed beer and waited to get fire building up for couple of hours and had a good chat. I had small headache this point, but thought it was just because i hadn’t eat basicly nothing yet. So took some snacks. 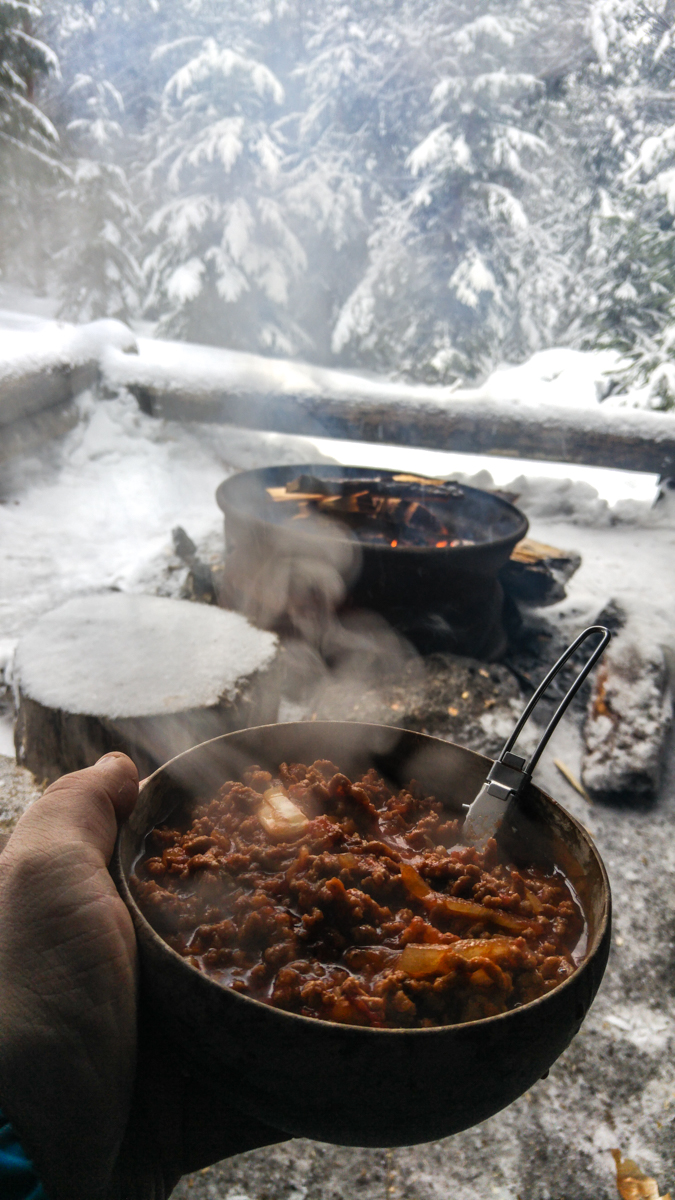 Fire started to be ready for making the fod, so get things ready. Minced meat, spaghetti (which we forgot to the cash desk and used the noodles..), onion, spices…i was really hungry already. And my headache was getting worst.

After the food, thought we should take a nap, maybe it helps my headache. But while i was hanging about 30 mins, couldn’t sleep at all. Headache was so bad that i had tears in my eyes.

So we talked and decided to leave the place and go home. Friend was a bit worried, checked my pulse and said it was quite high. He was thinking to take me to the hospital (he is a doctor).

We packed our gear quite fast and left. It was a big dissappointment to me. But friend understood well.

After 10km drive, headache was almost gone, but still felt a bit numb. My friend told me that he had a headache too, but not as bad as i had. And he can stand pain quite well.

At this point, i knew what was causing my headache. Got final answer in the scheel from my teacher. (studying to be an electrician)

answer : 400 kV powerlines, which were only 70 meters away from the lean-to.

It was snowing and snow was a bit wet, so snow acted as high resistant conductor. Lines were humming a bit, so there was a load because of low temps. And i think it was because of the strong magnetic field too.

So, next time, will be far away from powerlines….