Since the august, we have been wondering when we could have a new meeting. So far we have had 2; Liesjärvi National Park (where i couldn’t go) and Kelvenne meeting at the Päijänne National Park. Also some small local meetings.

So my friend Eemeli took the responsibility for the next meeting and it would be in Nuuksio (Noux) National Park at Espoo.

53 sq km Noux National Park was established in 1994 and it’s managed by Finnish Forest Ministry. Noux location near Helsinki, capital of Finland is a bit unique in Europe.
The area has been inhabited over the years, because of it’s swamps and rocky terrain.

Because the Finnish Scouts have been used this area for such a long time, it helped establish the National Park status. Without the protection plan, this area would be build for living because high rate of population and building growth on that time.

Because of it’s location, it’s been highly visited park with many outdoor services. There is also rented cottages, lean-to’s and camping areas with facilities and fireplaces.

Saturday morning, i  drove to my friend Juha’s place to the east part of Tampere. Our driver Jyrki and his wife Riitta came to pick us up at 9.30am. As you can see, we took quite a lot of gear, since we would walk only couple of kilometers… 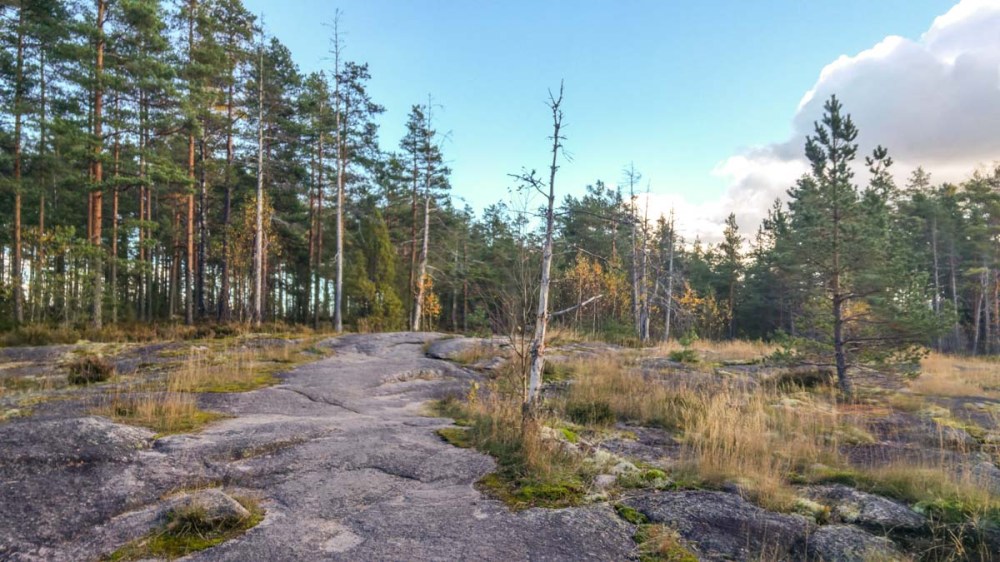 We arrived to the Siikajärvi parking, and it was full! Luckily one car was just leaving so we got a place. Later i heard that the original plan to start from north Haukilammi parking, was a bad idea since it’s much bigger area was full…

I met my friend Susanna there too, who brought some stuff to Juha. She has a company which sells hiking gear and wanted to help by bringing orders to the meeting.

And my friend Nella, who supposed to be here already, turned out to be in wrong place. Susanna was kind enough for pick her up.

Nella is my old friend and she is one of the well known travel bloggers in Finland. She will be writing about this meeting and about hammocks too. We haven’t seen each others for 7 years or so, so we had lot’s to talk.

Unfortunatly i couldn’t keep the original plan for going hiking in the park before meeting. So photos about this park are only from the meeting which was quite close, only 2 km away.

Wide trails told me that this park is highly visited. But i like the views and this trail took us through the big rocky areas. Small yellow wooden diamonds guided us.

We arrived just in time, because Eemeli and Pilvi got there at the same time! This camping area is rented for us so we could be here just alone. High rocky hill showed us a good view to the lake Kolmoislammit.

So what would hammocker do at first when they arrive to the meeting? I think you guessed right… find a good spot for the night!

Ali was the fastest, he got his hammock ready when i was just starting to unpack my backpack… 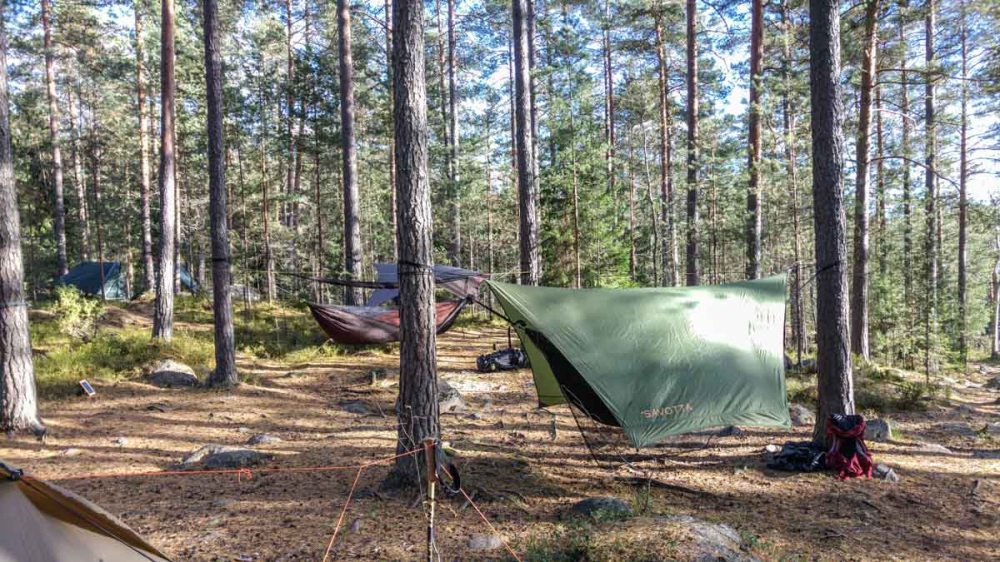 I had to help also Nella, since she didn’t know how to set up her hammock. She was using my older gear, TTTM double with DD underblanket and Savotta Tarp A. I usually have the DD UB in my WBB XLC, but Jani asked if i wanted to test his WB Wooki underquilt.

So, here are some of the hammocks in this meeting….

Rest of the evening we had some good food and more people arrived to the meeting. There was total of 20 of us, 10 cancelled. So this was double compairing to the Kelvenne meeting. If this get’s doubled in every future meetings, we need whole park to ourselfs!

Some found a great places down from the rocks, i was a bit jealous to them that i didn’t notice these places…

Eemeli and Pilvi made pancakes for all of us and one hammocker had some Spruce syrup, which worked well with the pancakes. 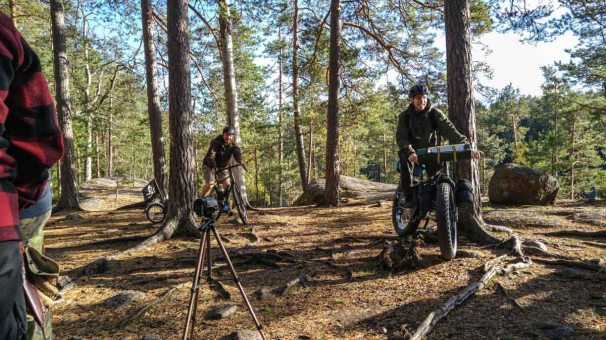 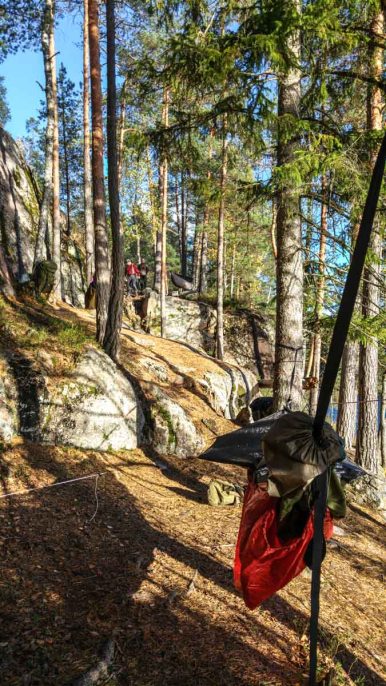 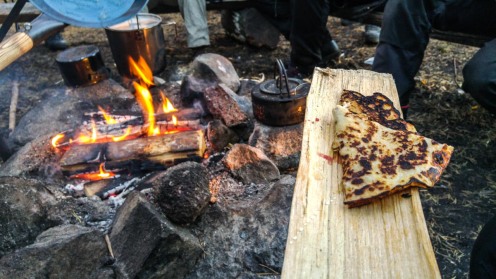 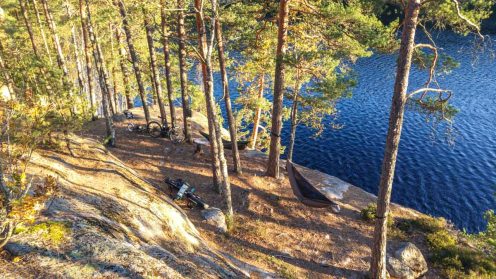 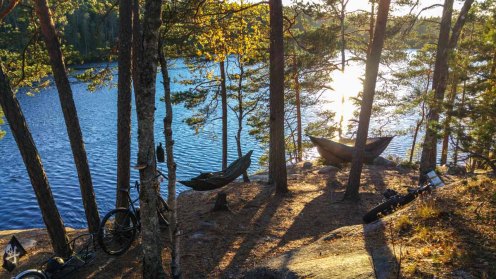 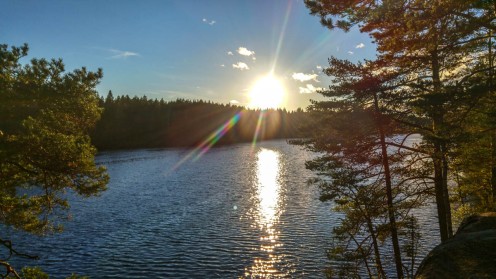 Sun was about to set 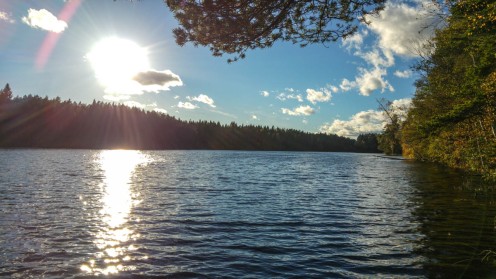 Couple of girls came to say hello to us, they are also in our Finnish hammock group, but they don’t have hammocks yet. So same time as we were checking each others setups, they got good information about hammocks and what they need to know about certain models. 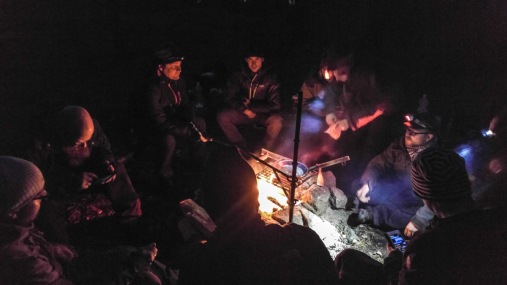 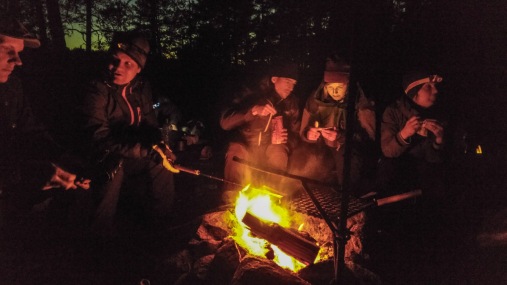 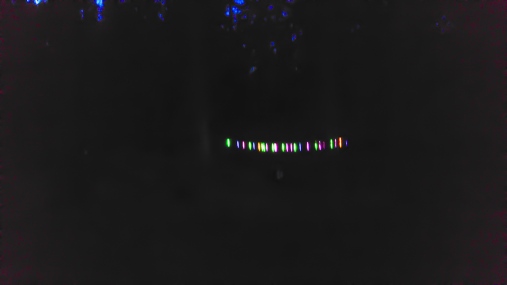 They got some glowing sticks…! 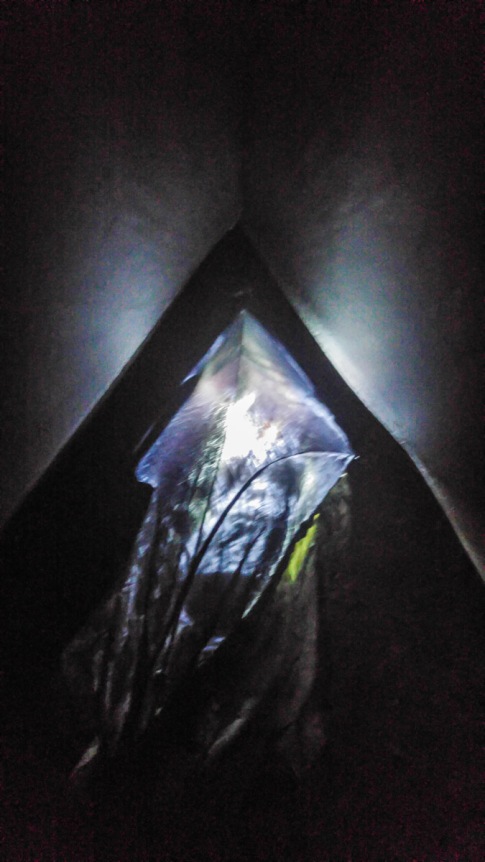 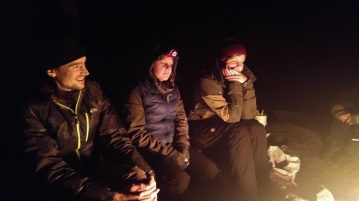 Jyrki and Riitta brought some candels 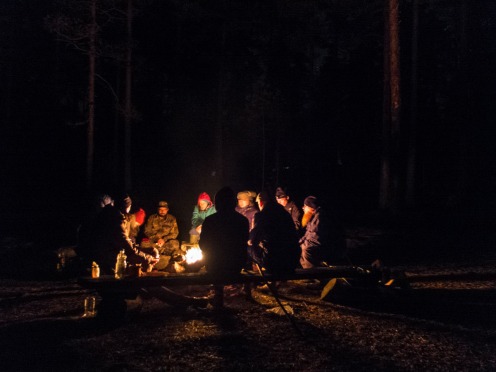 Sun went down and we got together around to the campfire. It was getting colder, but the fire kept us warm. We had a great stories about our trips and experiences.

I took my camera and took some long exposures from my hammock. Seems one hammocker brought lot’s of glowing sticks!

Jyrki and Riitta had some candles with them, and those gave warm light on their small trail to their hammocks. 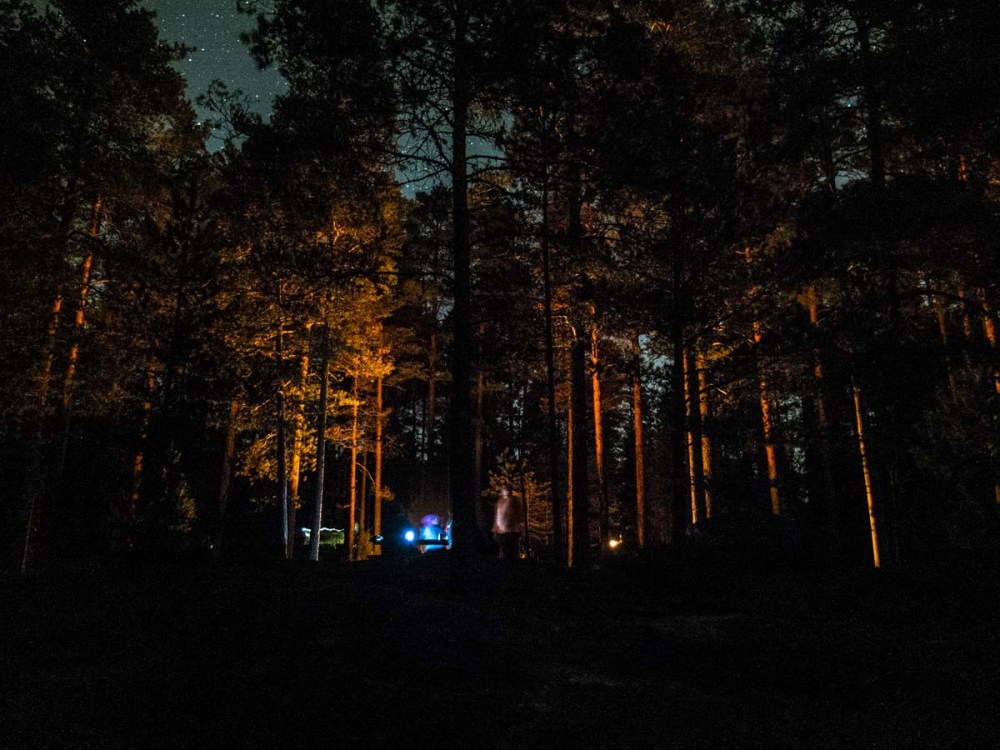 Stars were really bright and i took some shots from the sky. Went to sleep around 11pm and some were up untill 2 am at the campfire. 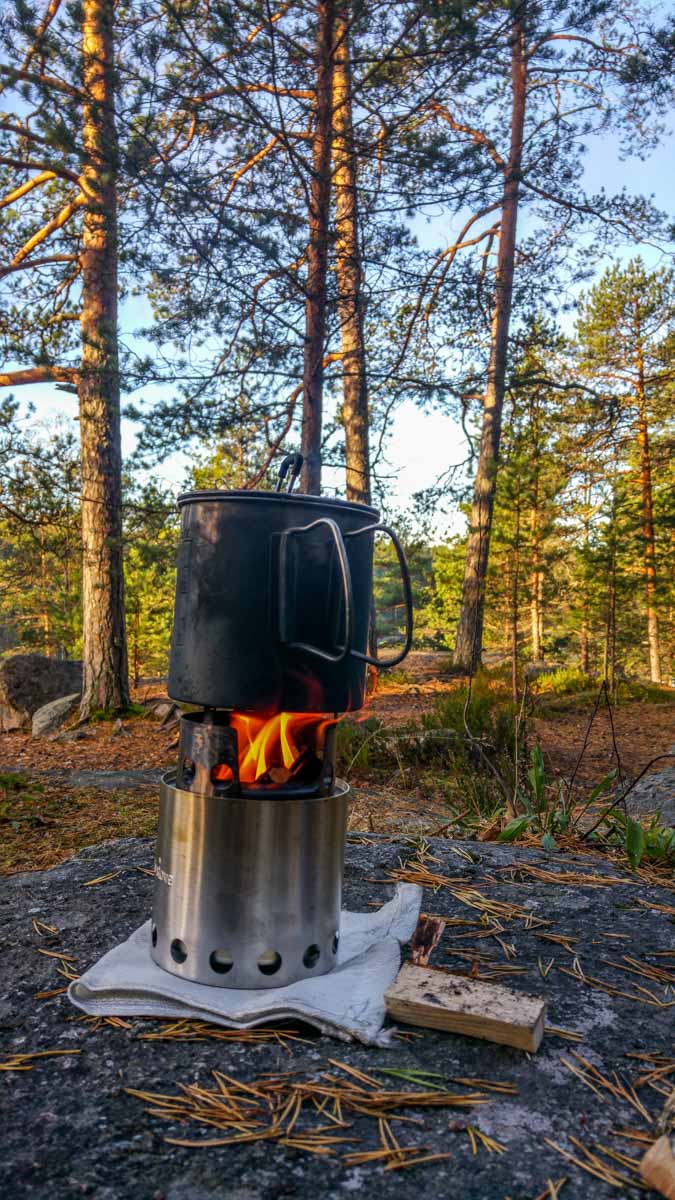 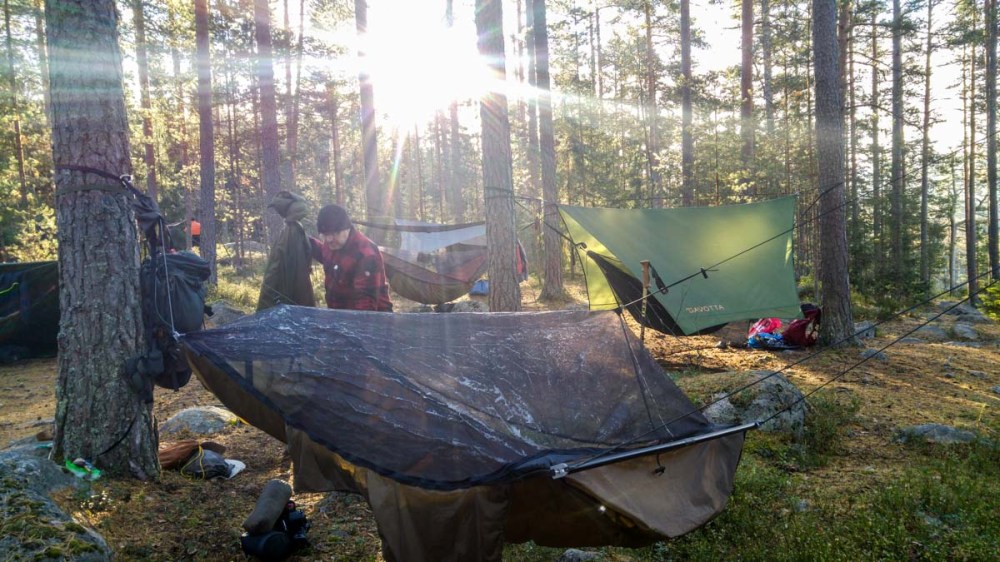 Some of us woke up at 7 am and started making firewood. I got up soon too and was happy about great sunny morning. It was quite cold and humid night, but nobody complainabout cold night. So it was good to hear. Nella got up around 8 am and everybody asked about her experience. She said she is a bit confused, because it’s not hurting nowhere! She slept really well and later she asked if i want to help to find a good hammock set next spring.

It was a great meeting and everybody were really happy. We talked that sould have a new one soon, also during the winter too. Also since almost half were from the Tampere, we are going to our own meeting soon. Will write about it then.

Here is a Ali’s video from the meeting : https://youtu.be/D9gxI4DrTc4

Thank you for reading!
And you van find all photos from here : http://pixabilly.1g.fi/kuvat/Hiking/Nuuksio/