I have been sleeping in hammocks for few years on my trips and hikes. During these times, i have tried to find the best insulation for my back.

I have tested foam pad and airpads, which have kept me quite warm. But i am a bit restless sleeper and specially i can’t fill the air pad completely for two reasons; it won’t sit well in the hammock and it slips easily away under my back. Foam pads stay much better. Also the problem for me is that i am a big guy, so my shoulders and sides get a bit cold sometimes because the pad is not wide enough..

So i bought DD Underblanket couple of years ago and that works for me perfectly. I can freely move around in hammock and it stays around me well. Since it wraps around my back and sides under the hammock, i feel warm and toasty while laying.

Unfortunately, DD UB doesn’t work well with other hammocks than their own. Attachment system is different with shock cords, so i had to think where to tie it when i was using it in my Warbonnet Blackbird XLC. And it slides off to the side a bit sometimes, so i felt cold since the cold air got between the underblanket and hammock. Underquilt has to be well sealed so it won’t have any air leaks. Also it’s tidily around the hammock so it will get warm well.

There are many companies who are making the underquilts to fit every hammocks, but those are mostly in the United State, for example the Hammock Gear.

Here in Europe, we have UKHammocks, which make their own design. But their shipping times are long, 5 weeks according their website, but people have been waiting over 2 months. They order the Argon fabrics from the United States, which causes delays. Also their shipping costs are quite high. Quality seems to be pretty good what i have seen.

End of the last autumn, i found out that polish company CUMULUS have their own hammock section on their site! They have Selva down underquilts and Taiga down topquilts, which have reasonable prices. They also make custom orders if something needs to be changed.

This was a great news for european hangers! Cumulus was established in 1989, by Zdzislaw Wylężek, a Gdynia mountaineering enthusiastic and during the 28 years their products have gain a very good reputation from their sleeping bags and clothes.

I send them an email where i ask for possibility for test their product. I was interested to get a winter underquilt, the Selva 600. Got an offer to pay half, so i made the deal. Selva arrived 2 weeks later, in early January.

I haven’t own down products before, so you might believe how it feels so amazingly light. I opened the bag and pulled it out, and it feels really quality material and man, that loft is amazing. It just looks like self-inflating pad. Well, kinda. This could be used as a blanket too.

The olive-green Pertex Endurance fabric feels great and it is designed to be wind- and waterproof. Sewing have been made really well and tightening and adjusting locks are good quality too. Inside has black Pertex Quantum fabric. Both fabrics has down proof and wind proof with high breathability, plus the Endurance has water-resistant.

They also have an option for their polish goose down, the hydrophobic treatment, which i ordered. The benefits are that down won’t get wet so easily, it dries faster, keeps its fill power and don’t lose it’s properties after washing. Is the treatment nessessary, this divides opinios. 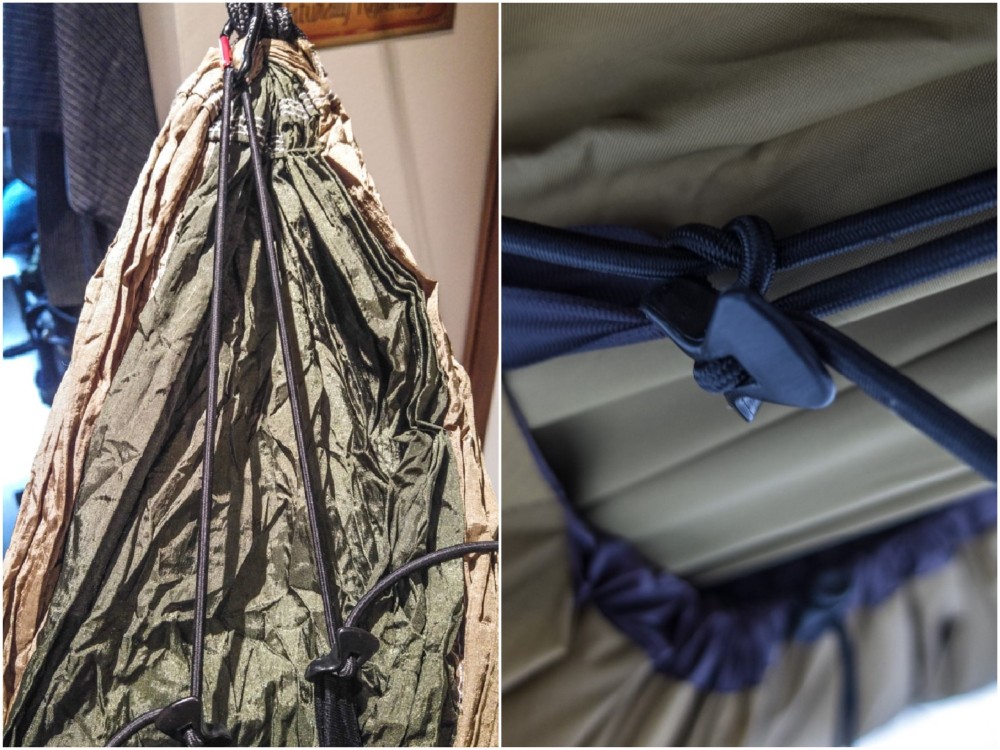 Both end has 2 adjustable locks and i found 10,5 meters of thick shock cord from the package! This didn’t come with the instructions, how they have been planning to set it up. From their site i found out that they have planned to tie it to the tree or the suspension on the tree. Well, this was a bit of a problem, because i have doors in my Super Fly tarp.  so i wouldn’t be able to close them. Cords act also as anwater line and makes the hammock and underquilt wet. Would be nice to have instructions, since there is not so much information about these underquilt, specially here in Finland.

So i cut 2 x 1 meter pieces of cord, took 2 small carabiners and cord goes between the locks. I attach the carabiner to the hammock ends and shock cord runs through it. Also the carabiner will be top of the end, so it will lift it up a bit. This way i saved lot’s of cord and it won’t be so annoying to pack.

In the first version i had 4 x 1 meter cords, which i tight to the underquilt loops, it runs though the carabiner and came back to the adjusting lock. But since it’s really thick cord, i change it to the one cord.

First test showed to me that this fits quite well with the XLC and TTTM hammocks (Ticket to the moon). A bit better with TTTM since the XLC’s shape is a bit different with the bugnet and because of the footbox.

Both sides have 3 webbing loops, which could be used for adjusting. I tied a small cord once to the feet end loop on other side to stop possible sliding. Usually underquilts has a channel for shock cord go thought the sides to the both ends. This helps it to be really tight from the sides, so there won’t be any air leaks. Also i think that the side cord could helping to keep the underquilt around the shoulder too. But during the tests, i haven’t got much of problems without it. Also Selva needs to be adjust quite tidily under the hammock, which might cause discomfort to some person, because it affects to the lay.

Since the size L is 235cm long, it covers almost all of the regular hammock. With TTTM there was less than 30cm space left on both ends.

Both ends could have the draft collar. This could be done by custom order, but i think this should be done always. With the XLC i noticed some gaps, but didn’t feel myself cold at any point. Lock holds pretty well, didn’t notice any sliding.

Selva’s bag is very tight, it was quite a job to get all in! It’s loft is really good and first time i stuffed it inside, i kinda doubt it will fit. This doesn’t need any compression at all. 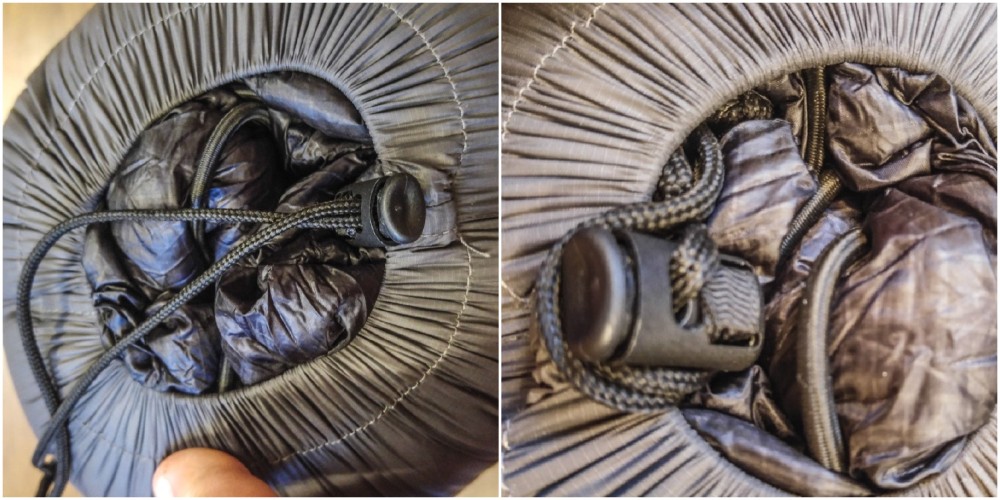 I had problems with the stuffsacks cord lock. It slides open because it’s so tightly packed and causing the underquilt coming out from the bag. I solved this by rolling the cord around the lock.

Took couple of weeks to finally sleep a night with the Selva 600. We had our hammock meeting at the Evo park. Temperature was around zero celsius (32f) and it was really humid and wet. I felt warm whole night and in the morning i noticed that underquilt didn’t have any problems. A little bit moisture on the underquilts surface, but kept the down dry. 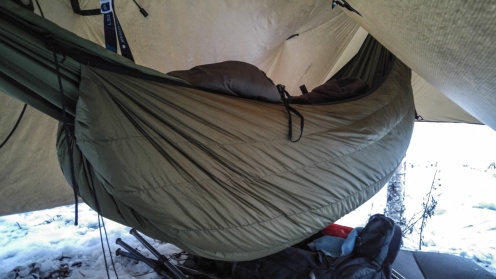 At the Haltia trekking night, temperatures were quite same, except during the night it went below zero and moist air got subcooled. No problems during the night, even there was a small breeze under me and some of my gear was covered with subcooled water.

Then finally came the chance i had been waiting for. We decided to go to the Päijänne National Park, weather forecast told that temps would be around -10C with some moderate winds. 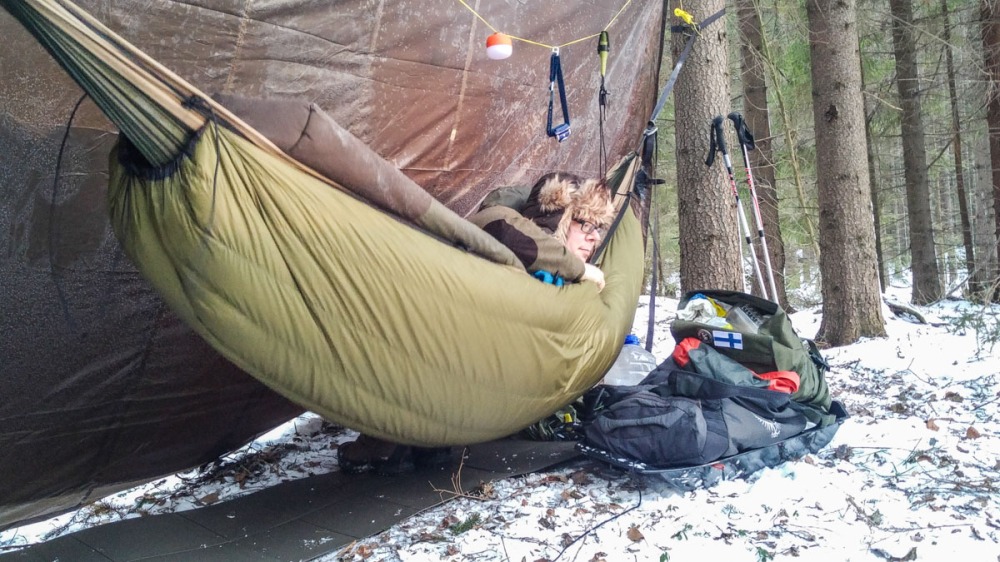 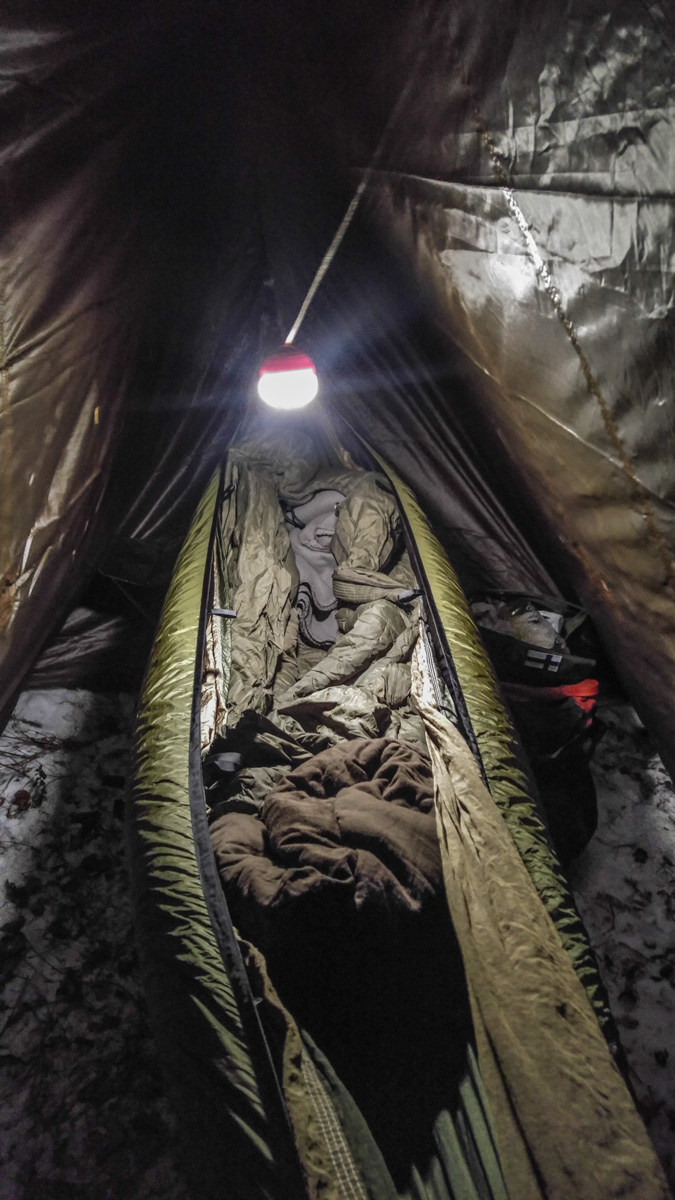 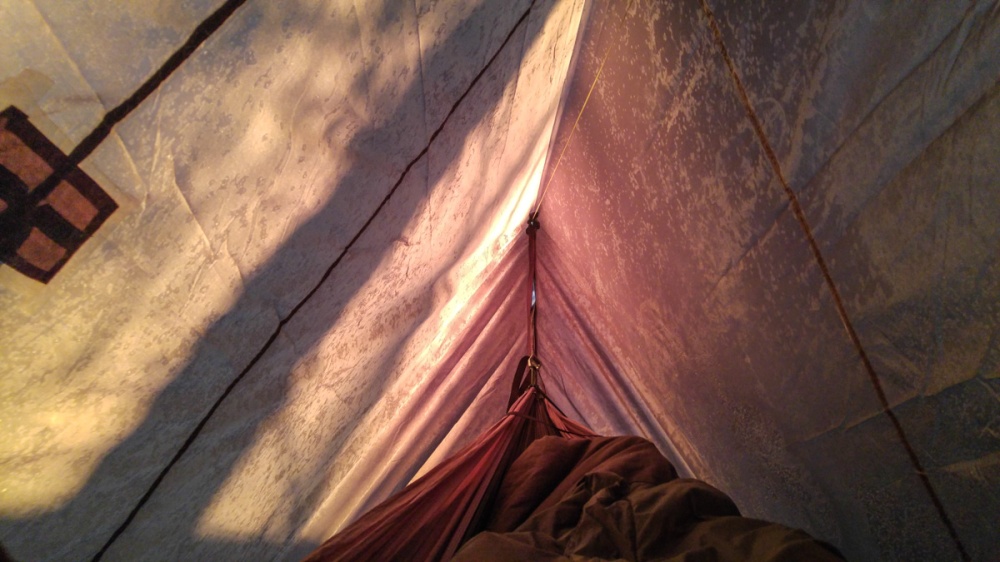 This time used my Ticket to the moon single hammock and it works quite well with the Selva. Temperature went down to -10C during the night as the weather forecast told us. When i went to sleep, i felt a bit cold on my back.It just took some time to warm all up.

After that, i felt warm and cozy the whole night, and it was hard to get out from warm sleeping bag.

During the test i used Savotta Military synthetic sleeping bag. It is similiar with the Carinthia Defence 4 bag.

I think the cord channel on the sides can seal the underquilt much better around the hammock and specially draft collar would be nice too. Even without them Selva did perform well, but the draft collar could seal up the possible air gaps much better for my opinion. Also the side channel most likely will give more comfort, since the underquilt doesn’t have to be too taut, and it doesn’t affect so much to the lay.

What comes to the draft collar, i got information from Cumulus and they are adding the collar from now on. Good news!

Long underquilt as this 235cm works better with the Warbonnet Traveler. With the TTTM i noticed some calf pressure, since the Selva was taut tidily and affects to the lay. Size M would work better with TTTM for my opinion.

I recommend to buy the size M if you are not really tall person or haven’t another reason for bying the long version.

Pertex fabrics are great and performed very well every night. Even with lots of moisture, i felt i could go many days without any problems. I like the soft feeling of the fabrics. Sewing have been made well and this feels and is very good quality product.

Loft is amazing and seems the hydrophobic down have been staying on it’s place well. I haven’t notice much of a shifting inside of Selva.

The stuff sack could be just a bit bigger, so it wouldn’t open itself and cause the underquilt coming out. On the other side, it is tight and small package with no need for compression.

Instructions for the suspension would be good to include in the package.

Hydrophobic down have to be ordered by email. But they are creating custom order site, where people can choose options and customizations for their own sleeping bags etc. Hydrophobic down can be chosen from the option list. Site is nearly ready.

I think Selva 600 is a great product, which need just really small modification, even it’s working quite well already.  This is a great underquilt for european market and easy to get. Shipping cost are only 7 euros, 15 euro for non EU countries.

Products have long warranty, 5 or 10 years.

Selva 600 costs 299€ without the Hydrophobic treatment, you can check other models and Selva 600 by CLICKING HERE. 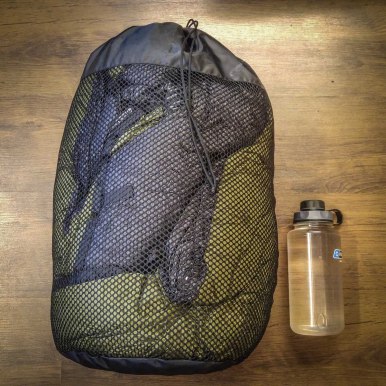 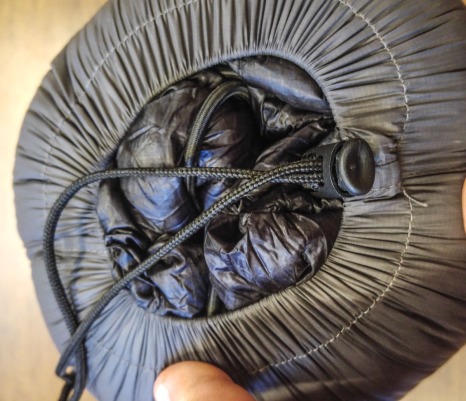 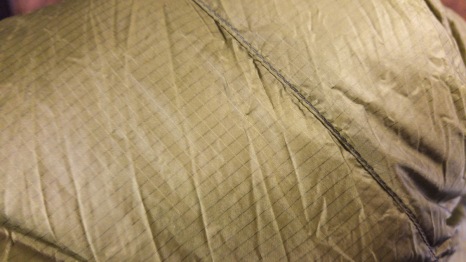 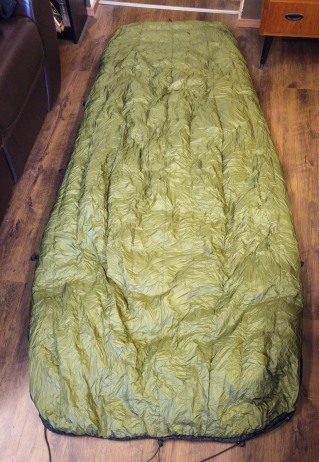 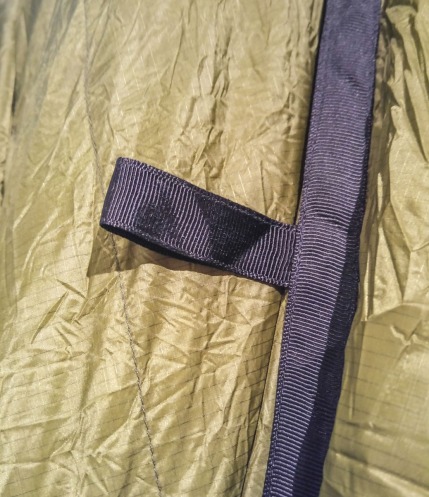 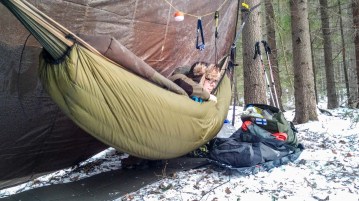 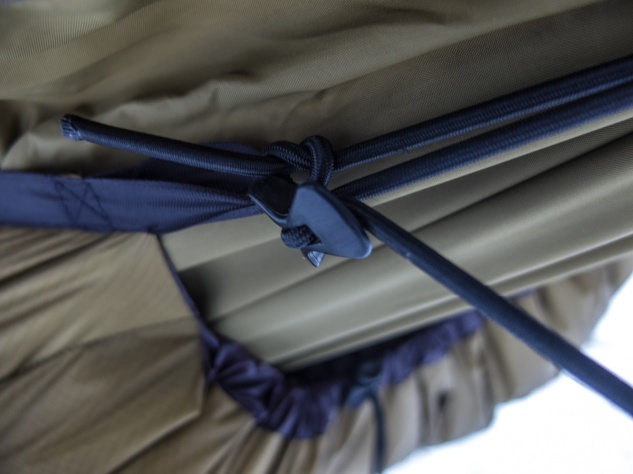 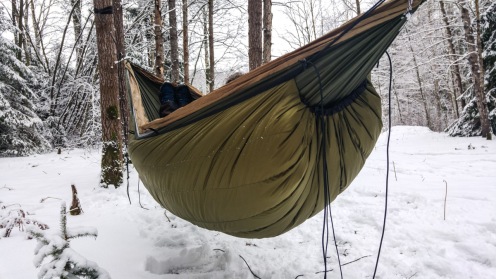 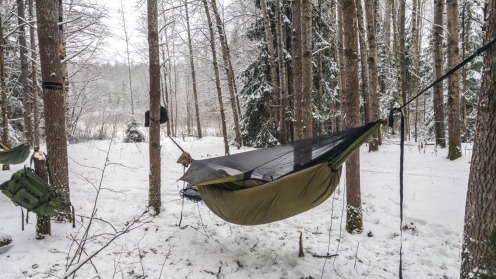 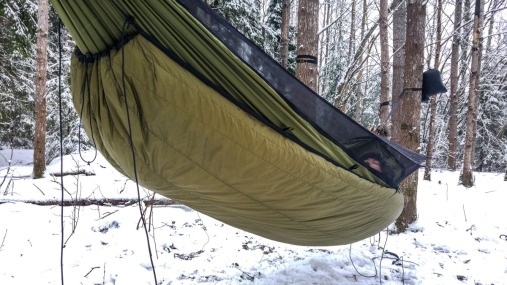 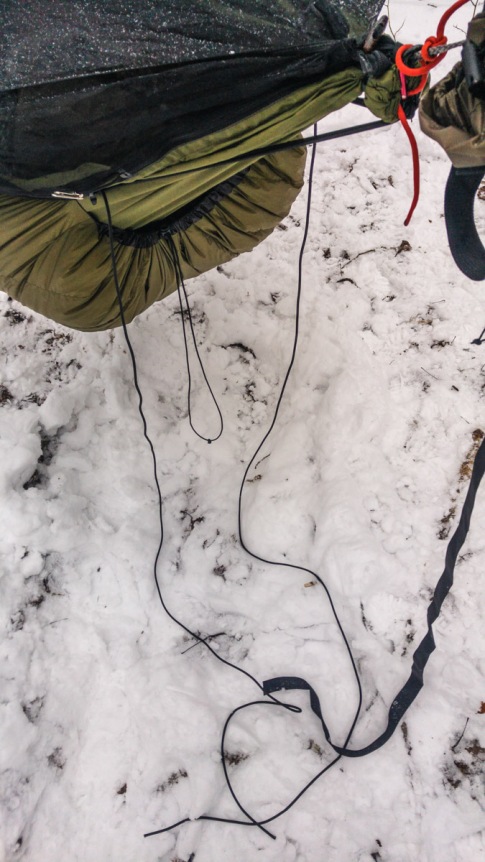